Fraudulent Checks Too Profitable for Criminals

Fraudulent checks, bank drafts, money orders, travelers cheques and gift cheques seem to be showing up all over the place. While a portion of these are passed by professional criminals — who sometimes recruit people off the street to pass them — a lot of people are being tricked into cashing them because they believed a (too good to be true) money-making opportunity.

Unfortunately — with the current state of the economy — people seem to be falling for the too good to be true scam opportunities more and more frequently.

Even though the quality of these fraudulent instruments varies, many of these counterfeit items are now produced with magnetic ink that scans. High quality check stock complete with the latest security features can be purchased in office supply stores or on the Internet. This means they scan through most of the readers in point of sale systems at businesses. When used with a real account number, which is why counterfeiting works, these items can be difficult to detect as fraudulent.

The increase in counterfeiting isn't limited to checks. Complete sets of counterfeit documentation are being presented at banks to open new accounts. A small amount of money is put into the account so funds verify on an individual check and then an area is plastered with a lot of checks. Sometimes this is done over the weekend and the funds put in to verify the checks are removed the following Monday. The identities used to pass these checks are often stolen. Since the identities and checking accounts are changed frequently to avoid detection, it's difficult to tie all the activity back to one group or person.

Frequently, people who are down-and-out are recruited to pass these items after receiving a promise for a few quick bucks. If they are caught they are normally considered "expendable" by the people behind the schemes. Sometimes, they even do this using their own identities.

It should also be noted that the groups opening fraudulent accounts and counterfeiting checks also set up phony numbers and even business addresses that get listed in 411 and on information sites fairly easily. Most people would be amazed at how easily they accomplish this because little to no verification is done by the companies listing these numbers. This is also done in a lot of the Internet-related scams and it is not uncommon for them to list a number to a financial institution that isn't real. When they set up these numbers, while the scam is active, they have people answering the lines. Often, if you listen carefully, it's pretty obvious that it is not a legitimate business and sometimes calls are forwarded to cell phones.

Another growing phenomenon is that fewer and fewer banks verify funds when businesses try to find out if a check being presented is good. In this instance, privacy laws and fear of litigation probably have enabled the problem to get worse. A lot of businesses use computerized check verification services, but when stolen identities are used, the checks pass through these systems fairly easily. Even worse, after the check is determined bad and the data goes in the system, innocent people are pegged as passing bad checks.

These checks often returned by the bank for “non-sufficient funds" because they aren't aware the account was set-up with fake information. Eventually the account is closed by the bank, but by this time the damage is done. Since banks frequently don't investigate thoroughly enough to determine the account was set up with fake (often stolen) information, it is never identified as fraud. The exception might be when the bank takes a loss, but more frequently they pass the losses to the entity cashing the check.

It's almost impossible to get anyone prosecuted criminally for non-sufficient funds/account closed cases, which means there is little fear of getting caught in this type of scam. Privacy laws also make it difficult for anyone outside the bank to investigate individual cases. In most cases, law enforcement needs a subpoena, which take time and effort to obtain. Given the resources available at most white collar crime units and the amount of fraud, it often seems like the system is ripe for manipulation by criminals.

Technology and the anonymous nature of the Internet have made check fraud grow substantially. All the necessary software/hardware needed is available right for sale at merchants that sell software and office supplies and on the Internet, itself.

There are also Web sites that appear to be dedicated to providing all the materials to commit fraud despite disclaimers that the items are for educational purposes only. One example, of one of these sites is called HackersHomePage. If you take the time to look at this site — you will see that the the items for sale on this site might enable someone to commit a lot more than simple check fraud.

Another growing phenomenon over the past several years has been the sheer number of counterfeit instruments being passed for a “too good to be true” money making scheme. These schemes, which normally don’t make sense, normally involve secret shopper job opportunities, offers to become a financial representative, auction deals and of course, winning a sweepstakes or lottery.

These scams lure people via spam e-mails, which are sent by the millions, daily. Once someone makes contact with the unknowing victim, they are shipped bogus financial instruments to cash. Along with the bogus financial instrument to be cashed there is a letter instructing the victim to wire the bulk of the money (normally over a border) back to the location of the scammer. Another twist in these money making schemes is to buy small and expensive items, normally electronics or jewelry, and ship them (again) normally overseas. A lot of eBay and Craigslist sellers get taken by these schemes.

From the botnets spewing the spam e-mails out in the millions to the counterfeit checks being sent by the parcelful all over the world, there is little doubt that some pretty organized criminals are behind this activity.

In 2007, an International Task Force monitored the mail in Africa, Europe and North America and intercepted billions of dollars worth (face-value) of counterfeit checks.

The coordination across International borders in these scams is pretty amazing. In any individual scam, the e-mail can come from one country, the checks from another and the request to wire the money to a third. 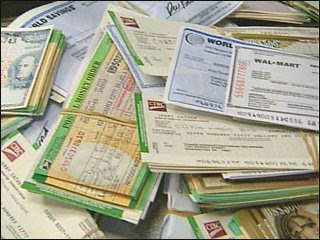 (Picture of checks intercepted in the mail)

There is also a trend where opportunists receive these items, cash them and keep all the money for themselves. If caught, they pretend to be a victim. If no attempt is made to wire the money to an exotic locale, they are probably in the scheme for their own personal gain. It isn't hard to look in just about any inbox or spam folder, reply to the right e-mail and have all kinds of bogus financial instruments shipped whatever address a person wants.

The first step to recognizing these scams is to understand how they work. Most if not all of the reasons these checks are being presented aren't going to make sense to a reasonable person. The cliche is that they are too good to be true and they normally are.

The best places for potential individual victims to learn how not to be taken are FakeChecks.org and OnlineOnGuard.gov.

A good resource for businesses and other public entities to learn about check fraud is the National Check Fraud Center.

In closing, the sour economy is probably fueling an increase in all kinds of fraud. The bottom line is that individuals and businesses are being ruined by it. When it comes to businesses, any dollar lost to fraud normally equates to a dollar off the bottom line. So far as the individuals being victimized, cashing these items can lead to being financially ruined and even arrested.

The best defense against becoming a victim is to know how these scams work. After all, very few people become victims when they know they are being ripped-off!
Posted by Ed Dickson at 3:46 AM 1 comment: