Love is a many splendored social engineering tool and spammers are busy sending out a whole lot of their particular brand of love across the electronic universe.

An interesting blog post (Love Hurts) by Kevin Haley at Symantec points out that malicious code writers are busy spreading their work in attachments hidden in the millions of spam messages being spewed out by zombies (compromised computers). If you click on one of these attachments — and your machine isn't bulletproof — it also can become a zombie and used as part of a botnet to send out more spam. Botnets are groups of compromised computers used to form a super computer. Of course, downloading malware can also mean that all your personal and financial information will be stolen, too. Please note (as you will see below) that some forms of malware currently being sent out can do both.

Kevin's blog post came out at almost the same time Symantec issued it's monthly Spam Landscape Report. With Valentine's Day coming up, love is a predictable lure and it's probably a good idea to make sure you know who loves you before clicking on any links in an e-mail.

Another predictable finding in the report is that spam levels are continuing to rise to normal levels after they fell when McColo was shut-down. McColo (a Web service hosting provider) was shut down in November after it was discovered they were the source of a large number of botnets, which are used to send out spam. Last month, 79 percent of all e-mail was spam. The report also notes that the point of origin for spam is shifting a little. Although the United States is still number one, the number of active zombies in other countries is rising. While some of this is being attributed to McColo, the report points out that this might point to the fact that some of these countries have an increasing number of users accessing the Internet.

Besides Valentine's Day, President Obama also continues to be used as a spam lure, according to the report. A lot of this spam contains malware with files names such as usa.exe, obamanew.exe, statement.exe, barackblog.exe and barackspeech.exe. The malware being spread in these spam e-mails is called the W32.Waledac, which is capable of both stealing sensitive personal and financial information and turning a machine into a zombie. It also establishes a backdoor to a machine so it can be remotely accessed.

Current events (and holidays) have been and probably will continue to be used as social engineering lures to snare the unwary.

Also noted was a rise in Russian spam hawking goods and services. With cheap long distance services using VoIP, the Russians have actually set up telephone numbers for their intended victims to call. My guess is that they will entice someone to send money, which can't be recovered when the person sending it discovers they've been scammed.

Chinese gambling spam is also mentioned as a new phenomenon in the report. It appears to be patterned after English language gambling spam, but is written in Chinese.

Last, but not least, Nigerian spam is mentioned. Nigerian or 419 spam is named after the section of the Nigerian penal code dealing with fraud. It normally is a come-on for lost riches or winning a lottery and has a lot of spelling and grammatical errors. Typically known as advance fee fraud, the victim is enticed in sending money across a border (wire transfer is preferred) to secure their fortune. Of course in the end, the victim never receives anything and is often left in financial ruin.

There are many twists to advance fee and one of them is to send a bogus financial instrument to a person with instructions to cash it. If the person doesn't get arrested for presenting it, they are instructed to send the money back to the scammer. Of course, the cashing institution eventually figures out the instrument is bogus and the victim is held liable for it.

A lot of people think that advance fee all comes from Nigeria, which isn't true. I've personally traced it to a lot of other places and called some of the telephone numbers. The person answering didn't sound Nigerian and I've spoken to a few people from Nigeria in my time. Naturally, this doesn't mean that scam activity is not coming from Nigeria and just that not all of it does.

Pam Dixon, of the World Privacy Forum, went on record recently that the spelling and grammatical errors aren't being seen as much in advance fee lures anymore. Obviously, advance fee scammers, wherever they hail from, are being more careful and have discovered spell check?

To close, the Anti-Phishing Working Group's recent report on phishing, which is delivered via spam, has noted that the number of crimeware-spreading URLs out there has increased 258 percent versus the same time period last year. It also noted a record high in the amount of hijacked and victimized brand names. Last but not least, it noted another record in the amount of malicious application variants being seen in the wild (on the Internet).

This would suggest that spam is getting more dangerous and the people sending it are becoming more sophisticated. The smartest thing to do with all spam is to delete it. Making sure your computer's security is updated with a known and reliable vendor is also a smart thing to do. After all, as I've speculated many times before, most fraud, phishing and financial misdeeds on the Internet start with spam.

With the Heartland Data Breach still fresh in the news, word of a $9 million heist using data from another payment card processor (RBS WorldPay) has hit the air waves. RBS WorldPay reported in December that their payroll card system was hacked and 1.5 million financial and 1.1 million personal records were compromised. Payroll cards are used by employers to pay their employees by loading their pay onto a debit card.

A Fox News investigation has now revealed that on November 8th, a coordinated attack netted $9 million using cloned cards in 49 cities, worldwide. The attack occurred all over the United States, Montreal, Moscow, and Hong Kong in about 30 minutes.

Another scary aspect to this attack was that the hacker was able to remove the daily withdrawal limits of the cloned cards. According to the Washington Post, 100 cards were used and fake deposits were used to refuel the balance on the cards. Large withdrawals were then made again and again on the cloned cards. Please note this represents that a very small percentage of the total cards compromised were used in scheme. No information was available on how they refueled the accounts.

I've seen accounts refueled using bogus checks, however in this instance, I would suspect it occurred in a more electronic manner. This leads me to believe we will see more disclosures regarding this case as time goes on.

According to official reports, there are no primary suspects in the case. Photographs of some of "lower level soldiers" used to withdraw the money have been released in the hope that (if caught) they will provide information on the people, who provided them with the cloned cards. Unfortunately, with the anonymous nature of the Internet, coupled with the fact that chat-rooms are often used to facilitate the distribution of stolen data, the lower level soldiers might not know the identities of the main players, themselves. 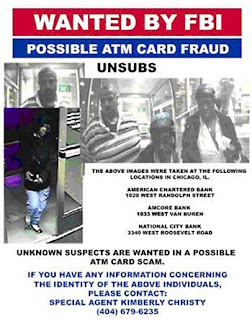 In the recent Heartland breach, it was disclosed that they met PCI DSS (Payment Card Industry Data Security Standards). According to Visa's list of PCI DSS certified vendors, "RBS Lynk" (Royal Bank of Scotland) is certified. PCI DSS standards are the payment card industry's solution to protecting their data from being misused.

I also discovered that RBS World Pay and TrustWave put out a press release in 2007 announcing they were providing level 3 and level 4 merchants with a specialized data security service to identify their risks and vulnerabilities. The idea behind this service is to help these merchants become PCI DSS compliant.

Interestingly enough, TrustWave also certified Heartland in 2008, according to the article I read in Dark Reading.

PCI DSS has been criticized as being expensive for merchants and now we are seeing it compromised, too. The sad thing is that despite a lot of money being shelled out to become PCI DSS compliant, the people shelling it out seem to be just as vulnerable as they were before. In fact, someone might conclude that PCI DSS is giving everyone a faux sense of security (opinion).

As usual, in these cases, a class action law suit has been filed against RBS WorldPay. WorldPay has also announced the cardholders will not be held liable for the charges, according to the page on their site about this matter.

Thus far, according to all the sources I read, no identity theft has occurred. My guess is that because the 1.1 million people compromised are monitoring their credit, none will occur in the short-term. In most of the many breaches I've read about, very little of the information was used after the breach was disclosed. If you think about it, this makes sense because measures have been taken to make the information useless to criminals.

There has been a push to put everything from payroll to government benefits on payment cards. When this occurs, personal information as well as the financial data used to produce the debit card accounts is stored to process the transactions. Since employers (and the government) use vendors (card issuers) to accomplish this task, this means we have sensitive information being transferred to third parties. It wouldn't surprise me if these third parties transfer the information somewhere else when they outsource it, all over again.

Perhaps, what is needed is a common sense solution to the problem. As long as we keep sending information all over the place, it creates too many points where it can be compromised. The bottom line to all this is we appear to be making it too easy for criminals to take advantage of the situation.

The costs are getting out of control, too. Although I've never seen any information on how much of this is going on, the Washington Post quoted a source from the security industry (Ori Eisen, 41st Parameter) as stating $50 million was lost in one month in New York City alone last year.

I wonder if any of our bail-out (taxpayer) money is being used to cover these losses. Although, I can't say for sure, the people it was given to can't seem to say where it has gone, either. Granted, it might be a long shot, but the money had to be given to cover losses caused by people who were a little too greedy in the first place. We need to wake up and realize that there is no free lunch and the costs of all these types of scenarios are passed to all of us when history is written.

There is no such thing as zero fraud liability!
Posted by Ed Dickson at 5:00 AM 2 comments: