Terrorism on the Internet?

SITE (The Search for International Terrorist Entities) has published an analysis of a new "how to beat Internet security" magazine sent out to password protected "jihadist forums."

The first issue of what is indicated to be a periodic magazine, Technical Mujahid [Al-Mujahid al-Teqany], published by al-Fajr Information Center, was electronically distributed to password-protected jihadist forums today, Tuesday, November 28, 2006. This edition, 64-pages in length, contains articles that primarily deal with computer and Internet security, in addition to other pieces explaining Global Positioning System (GPS) satellites and video types, editing, and encoding into different formats. The editors of the publication state that it was written to heed the directives of the Emir of al-Qaeda in Iraq, Abu Hamza al-Muhajir, and his call for technical support. Material such as this, regarding anonymity on the Internet, concealing of personal files locally on a computer, and utilizing all schemes of encryption, is to serve as electronic jihad, and a virtual means of supporting the Mujahideen.

In another story out there, CIO Today is reporting:

According to the U.S. Computer Emergency Readiness Team (US-CERT), a joint venture between the U.S. Department of Homeland Security and private industry, threats were found on an Islamist Web site calling for attacks against U.S. financial Web sites through December, until the "infidel new year."

According to the story, there has been no evidence of any attacks and the alert is only to caution the industry.

Nonetheless, similar activity has been seen in the recent past:

I wonder how many attacks never happen because of some dedicated individuals at US-CERT and SITE?
Posted by Ed Dickson at 6:43 AM 2 comments:

The Serious and Organised Crime unit, the UK's financial crimes warriors, have delivered a significant punch to an organized identity theft gang, believed to have been in operation for ten years.

The gang, which seems Eastern European in origin, operated behind the cover of a "Moscow Bank" in Great Britain and Spain. Victims have been traced throughout Europe and the United States.

Fake identities and cloned credit cards were used to purchase "electrical goods," which were later fenced on eBay. The illicit proceeds of these transactions were "laundered" via PayPal and WorldPay accounts.

Police discovered bogus passports, council tax documents, electoral registration applications, and bank statements as well as employment references from both an unsuspecting firm of solicitors and a fake one that were used to create false identities.

Cloned credit cards were used to buy cameras, computers, iPods, computer games, Royal Mint coin collection sets and other goods such as Liverpool FC strips from a variety of website traders. These items were then auctioned on eBay.

Unfortunately, a lot of the evidence was destroyed when one of the alleged gang members (while handcuffed) hit a power switch that wiped out the information.

Because of this - the true monetary implication will probably never be able to be determined from this activity.

Of course, even if the information was recovered, it's entirely possible that there are other databases that have yet to be discovered, or never will be.
Posted by Ed Dickson at 6:33 AM No comments:

Anyone noticed that spam is filling up your inbox? No, it's not your imagination, experts are saying the volume has increased up to 300 percent -- depending who you talk to.

As usual - in the technology versus technology battle - the bad guys seem to have defeated a lot of the countermeasures (spam-filters) that have been developed in recent years.

If you would like to see all the technical explanations, Network World did an excellent article with links to previous articles, here.

According to the Network World article, a certain Amichai Inbar a.k.a. John Che Blau and Jonathan Blau is behind a lot of it (operating out of Tel-Aviv).

I'm sure there are those developing additional countermeasures - which will be made available at a price - but I have a better idea. Use existing laws to take away Mr. Inbar's "ill-gotten proceeds" and put him and all his friends where they belong (prison).

Once they start taking away all the "ill-gotten proceeds," there would probably be plenty of it to fund additional legal actions!

So far as countermeasures being developed to meet this latest threat, history dictates that in a matter of time, they will be obsolete, also.

It probably wouldn't be hard to find the "spam kings," they don't seem to be hiding in caves on the Pakistani/Afghani frontier.

In fact, according to Spamhaus - the largest point of origin by far is the United States.

Perhaps, Microsoft is setting the example (after themselves being attacked for years) and taking legal action.

In my opinion, Microsoft is leading the way towards an effective resolution of this problem.

Here is an interesting site from "Ban Spam," with International contacts on where to report spam (broken down by all the different scam variations and countries).

The more spam that is reported provides valuable intelligence to those, who are taking legal action to stop it.
Posted by Ed Dickson at 3:21 AM 1 comment:

Tickets to the Oprah Show Smell a little Phishy

First gypsies impersonate Dr. Phil and now someone is selling tickets to the Oprah show that smell a little "phishy."

No one is reporting any cases of identity theft yet, however one this is certain; wire money to anyone for Oprah tickets and you are going to lose out!

Tickets to watch a taping of the Oprah show are free!

Fraudsters and Phishermen love to have money wired to them - because once it's picked up - it belongs to them and there is nothing the sender can do about it.

Western Union has a warning about wire transfer scams, here.

Of course, the personal information harvested from this phishing attempt might be for sale in underground forums (chat-rooms). More on this, here.

Please note that "unsolicited" requests for personal and financial information via the Internet are scams, no matter how official they might seem. Fake "official looking" websites - including banking sites - are all "too" common in the "sometimes" murky waters of the Internet.

For more on this, you can read the release from Attorney General Madigan's office, here.

The press release mentions information on where to report this scam at the bottom of the release (link above).
Posted by Ed Dickson at 4:10 AM 1 comment:

India Deals with the Problem of Credit/Debit Card Cloning 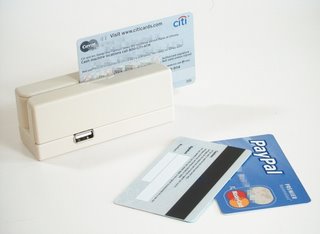 We read a lot of stories about credit/debit card skimming in the West, but see very few stories about it in other parts of the world.

India, which has become a giant in IT circles is now being victimized by the problem.

In May, I did a post about cloned credit/debit cards showing up in India. Since then I've had the pleasure of corresponding with a "security person," who is sharing information with me regarding the scope of the problem.

In November, in another case, there were more arrests in three Indian cities - 6 skimmers, laptops, a desktop and cards were seized.

The activity was facilitated with the collusion of waiters and shop-keepers.

According to my "source," more card-skimming has been uncovered and the Indian authorities are hot on it's trail. We can probably expect to see a few more criminals arrested in the not so distant future.

Until recently, cloned cards were normally sent in the mail from other destination points in Asia.

Recently, the news media was awash with stories of information being compromised at call centers in India. The industry and the government in India have quickly moved to enact legislation to counter this threat.

The stories got a lot of attention (probably because it happened in India), but in reality, information and data breaches are happening (with too much frequency), worldwide.

India seems to be proactive (refreshing) in taking legal measures, which are far more effective that technological countermeasures, to protect it's citizens and the industry, itself.

Of note, the recent skimming/cloning activity seems to have been introduced by British based gangs and the UK is suffering a "large" issue with this type of activity.

Video (interesting) on skimming in India from IBN, here.

Interesting and "informative" discussion about cyber-law in India by Praveen Dalal, here.
Posted by Ed Dickson at 12:24 AM 1 comment: