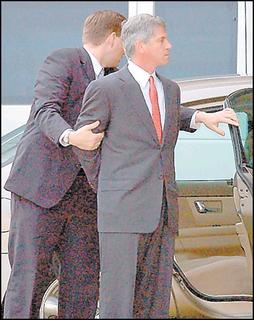 Aunt Millie was a rallying cause in 2000-2001, when Enron was illegally manipulating energy costs by faking plant failures etc. California suffered the brunt of it with outrageous bills and blackouts. In taped conversations between the traders at Enron, poor old Aunt Millie (a grandmother from San Diego on a fixed income) was brought up and it was (jokingly) suggested that she use candles. At the time, for some in California, electrical bills were closing in on the $1000.00 a month range.

For many of us, Aunt Millie became a rallying point to seek justice against Enron for their misdeeds. This statement clearly showed their lack of caring in their quest for profit by defrauding the common citizen, as well as, government entities.

On Friday, the now bankrupt company said it would pay 1.5 billion. The exact amount might be a lot less due to bankruptcy proceedings and has yet to be approved by the courts. California is seeking 9 billion in damages and about 65 billion in claims are being made in the Enron bankruptcy case. According to experts, many will never see the full amount of their loss. Even with this promise to pay by Enron, the majority of it will be in unsecured debt, which is currently valued at between 22 and 25 cents on the dollar.

I find it odd that since the price gouging directly affected the people of California that no refunds will be forthcoming to the people that paid the bills. Additionally, thousands of workers lost their jobs and investors lost billions when Enron filed for bankruptcy. I wonder if any of them will be made financially whole from this?

In the end, I see little justice in this for the victims of this debacle.

For a story from the AP on this, click on the title.
Posted by Ed Dickson at 6:17 PM

Two questions I continually ask when I see fines from corporations for malfeasance is, "Who is going to get the money." (I figure the judge and lawyers involved have their hands in the pie) and "Will the REAL perpetrators of the crimes have bank accounts and compound interest spilling into their hands when they get out of jail???

P.S. This time the word verification is easy. I know where all the letters are at on the keyboard! Whoo Hoo! Time to go buy a lottery ticket.