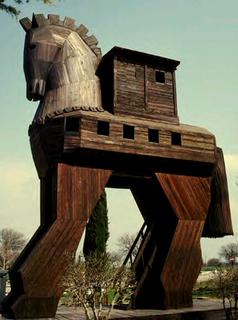 There are reports of a spyware ring that has been able to access the IT systems of approximately 50 banks, as well as, PayPal and E-Bay information. According to the security firm, Sunbelt Software, the result is that social security numbers, credit card numbers, bank account numbers and account information have been compromised.

Also reported at risk are a large number of personal computers.

Sunbelt Software's president wrote in the company blog that it discovered the identity theft operation while doing research on (CoolWebSearch). Allegedly, the spyware downloads with CoolWebSearch.

Discovered were thousands of computers "pinging" back to a domain in the United States that is registered to an offshore entity. Apparently, this is a very sohisticated attack, which isn't detected by most anti-malware programs. Windows XP users, who have not downloaded the Service-2 pack are considered the most vulnerable.

The spyware/malware (trojan) virus is being compared to the one designed by Michael Haephrati, arrested last month in London. Haephrati designed a trojan virus that enabled private investigators (hired by large companies) to spy on their competitors. Thus far, 18 people have been arrested, including officers of large companies.

Here is a post, I did on this story:

The FBI is investigating, but here again is another clear indicator that the way access to financial accounts and sensitive information is "authenticated" needs to be improved. It will be interesting to see how this story progresses.

For Sunbelt's Blog, which has a lot of interesting information on this subject, please click on the title of this post. Please note that they list a lot of free resources to determine, whether or not, your computer might be at risk. I highly recommend reading this blog!
Posted by Ed Dickson at 4:43 PM

Thanks for the heads up on this one. I recieved an email from a friend today that told about this but since he is always forwarding hoax emails (from email taxes to Bill Gates sending money for forwarding emails...) I did not give it another thought. Years ago I had a run in with coolwebsearch and it was a job getting their crap out of my computer. - Thanks for the link to Sunbelt - prying1 -

I upkeep our company's junkmail files, and scan for things that have got misfiled, so I see a lot of Ebay emails, and Citibank, and other supposed 'banks' phishing..

Just never ever give info out via email, or via links sent by email. Alawyas call customer service first... Most banks never send out email to get customer info. Never.