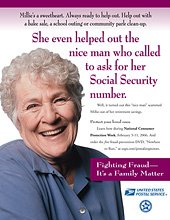 The news is awash with high tech types of crime. With tax season here, less sophisticated criminals will be out stealing mail in their quest for tax refund checks to steal.

I might term them as less "sophisticated" in a technical sense, but they can do a lot of damage.

With counterfeit identification and assumed identities (many criminals assume someone else's identity and get legitimate ID), cashing some of these items is easier than most people think.

You may now report suspected mail theft or a false change of address directly to the Postal Inspectors.

Although, the tax season brings these criminals out in ever greater numbers, tax refunds aren't the only thing they are looking for in their quest to commit financial misdeeds.

Stealing mail has been around since the postal service started doing business. One of the ways criminals use checks that are already written out is to "wash" them chemically and change the information on them.

Here is an excerpt from a warning published on the Better Business Bureau's site:

"Using a process known as check washing, mail snatchers erase the ink on a check with chemicals found in common household cleaning products or on the shelves of your local stores and then rewrite the checks to themselves, increasing the amount payable by hundreds and even thousands of dollars."

According to the National Check Fraud Center, check washing in the United States is a 815 million dollar a year business.

To view their site:

If you want to view the entire warning, read: Welcome to the Better Business Bureau.

With all the offers of credit people receive, stolen mail is also a lucrative means of committing credit card and loan fraud. All of these tie into identity theft, which creates 9 million victims and costs us 53 billion dollars a year in the United States, alone.

Here are some helpful tips from the Better Business Bureau to protect yourself from mail theft:

Don't leave outgoing mail in an unlocked box. Take it to work, drop it in a collection box, hand it to a letter carrier or take it directly to the post office.

If you have to leave outgoing mail in your box, do it immediately before the letter carrier comes, and don't raise the mailbox flag.

Avoid leaving mail in a box on Sundays and holidays, when letter carriers don't work.

Install a lock on your box. This can be done by placing the lock on your mailbox and then cutting a small slit in the mailbox that is large enough to slide mail through, but which is not big enough for a hand to fit in. Residents also can purchase a mailbox with a lock already on it for roughly $20 at a hardware store. In both cases, you will not be able to have outgoing mail picked up.

Criminals use other means than computers to commit their crimes. In fact, although the news blames technology for recent increases in fraud, it is the human mind and the creative resources of such that commits wrongdoing.

It also the human mind that will find the means to defeat those who choose to victimize the innocent.

In closing, I've worked around fraud for years and trust me, the Postal Inspectors (who are sometimes underrated) are some of the best minds in the war against Fraud, Phishing and Financial Misdeeds.