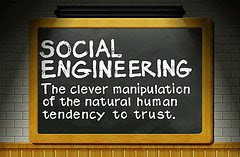 A new report issued by the Treasury Department's inspector general reveals that too many IRS employees compromised their user ID and password to an unknown person, who was actually a government auditor posing as a help desk employee.

Sixty percent of the IRS employees fell for the social engineering trick, sometimes referred to as vishing. This isn't the first time a test like this has been conducted. In 2004, 35 percent of the employees tested compromised information and in 2001, the failure rate was 70 percent.

In the recent past, the agency has also been criticized for it's aging computer systems and their name has been spoofed (impersonated) in phishing attacks.

I guess the IRS makes a good story, but they certainly aren't the only government agency, or private entity being compromised by activity like this.

Whether it's vishing or phishing -- where social engineering (fraud, deception etc.) techniques are used to trick people into giving up access to information that should be protected -- human beings are probably the biggest threat to information (computer) security.

True, the results of this report are shocking, but maybe we should listen to what it is telling us? If social engineering didn't work, my guess is that a lot of the current explosion in phishing and vishing activity would go away.

Even when malware, often referred to as crimeware, which steals information using technology is used, a human being has to be lured into clicking on a link, or visiting certain websites for the software to be implanted.

Maybe one of the problems is that people, who fall for these ploys are reluctant to admit they were tricked so easily? I've seen a lot of people fall for social engineering ploys, and not all of them are poorly educated, or what most of us would consider, stupid.

In fact, many us would probably be amazed at exactly who falls for social engineering ploys. Most people would rather remain anonymous because it's embarrassing to admit they were conned into whatever scheme they fell for.

Of course, the people I'm referring to have asked me to respect their privacy, and I'm an advocate of protecting that, along with being kind to victims, also.

Whether it is a government agency, big business, or non profit being targeted, the only thing that is consistent is we see more and more of this activity all the time. Trust me, if it didn't work, the criminals behind it wouldn't be wasting their time doing it.

If the activity is increasing, and social engineering it tied into most of it, the best thing we can do to defeat it, are more tests like these, combined with an effort to make people more aware of the problem.

While the results of this report aren't good, at least they are making the information public and not hiding it. My guess is that IRS employees aren't the only ones, who would fall for something like this.

Education and awareness are key in stopping this problem, which keeps growing by leaps and bounds!