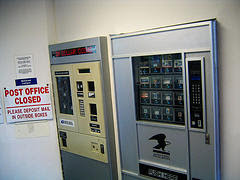 New scams are invented daily. Here is one, where self-service stamp machines (the kind that accept payment cards) are being targeted at Post Offices.

David Bowermaster at the Seattle Times is reporting:

In mid-July, three men left their homes near Los Angeles and traveled to Seattle to buy postage stamps.

But these were no ordinary collectors. Armed with at least 27 stolen credit-card numbers, federal prosecutors say, Artem Danilov, Stephan Melkonyan and Karapet Kankanian fraudulently purchased more than 3,200 books of stamps worth nearly $24,000 from Seattle-area post offices in just more than a week. A federal grand jury Thursday charged the men with an assortment of crimes.

Following a pattern that Postal Service investigators have uncovered in at least five Western states, the men made mass purchases of stamps after normal working hours from automated postal machines, which are accessible 24 hours a day in the lobbies of many post offices around the country, prosecutors allege.

While these three were caught (two Russians and an Armenian), it appears this activity has been occurring throughout the Western United States.

The illegal stamp-buying scheme appears to be a novel breed of identity theft, one that blends high-tech thievery, online commerce and the retro currency of the U.S. mail.

Since then, the Postal Service has uncovered illegal stamp-buying schemes in Washington, Oregon, Arizona and Colorado.

The Postal Inspectors suspect a larger ring is involved and some of the stolen credit card numbers used have been traced to a car wash in Southern California.

According to the article, here is how the suspects were using the stolen credit card numbers:

Danilov, Melkonyan and Kankanian allegedly used a credit-card reader to embed the stolen credit-card numbers onto the magnetic strips of gift cards from a variety of retailers, Brown said, a process that allows the gift cards to function like credit cards.

Although the authorities don't know where all the stamps were being sold, according to a assistant U.S. Attorney, some of them are being fenced on eBay.

Out of curiousity, I decided to see if new stamps (the kind used for postage) could be found on eBay. Amazingly enough, I found what I consider a large selection with offers of free shipping and discounted prices. What I found can be seen, here.

Of course, at a glance, it can be hard to tell what is legitimate and what is not on an auction site.

A lot of stolen gift cards (used in this instance to clone the cards used) are also fenced on auction sites. I wonder if the value on them had already been used, or if our suspects lifted them at a retailer before a dollar value was loaded on them at a point-of-sale (register)?

If you spot this type of activity during a visit to the Post Office, you can report it to the Postal Inspectors, here.

I guess those poor guys were not accepted by the local Russian mafia so they decided to have their own small business. lol

Credit Card cloning is on the rise and I myself have become a victim of this type of scam. I live in Tulsa, Oklahoma and many people I have asked here, never heard of this type of crime. Thanks for your article. I have linked to it from my site as well.