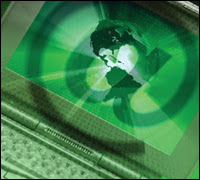 This morning I read that a teenager in New Zealand had been arrested for allegedly being the kingpin behind an international cyber-crime network.

Because he was a juvenile when the crimes were being committed, the authorities aren't releasing his real name, but on the Internet he is known as "AKILL."

The Associated Press is reporting:

Working with the FBI and police in the Netherlands, New Zealand police arrested the 18-year-old in the North Island city of Hamilton, said Martin Kleintjes, head of the police electronic crime center. The suspect's name was not immediately available.

Kleintjes charged that the ring was responsible for stealing at least $20 million using bank account and login details detected by their illegal spyware.

I decided to do a little digging on this and the FBI announced on their site that this is part of Operation Bot Roast II.

It appears that more than a teenager is being taken down for victimizing millions of people, worldwide.

From the announcement on the FBI site:

In June, we announced the first phase of Operation Bot Roast, which pinpointed more than a million victimized computers and charged a number of individuals around the country with various cyber-related crimes.

Three new indictments, including two this past month. In one case, we uncovered a denial of service attack on a major university in the Philadelphia area and then knocked out much of the botnet by disrupting its ability to talk to other computers.

Two previously charged criminals who pled guilty, including a California man who is a well known member of the botnet underground.

The sentencing of three others, including a pair of men who launched a major phishing scheme targeting a Midwest bank that led to millions of dollars in losses.

The FBI today announced the results of the second phase of its continuing investigation into a growing and serious problem involving criminal use of botnets. Since Operation 'Bot Roast' was announced last June, eight individuals have been indicted, pled guilty, or been sentenced for crimes related to botnet activity. Additionally, 13 search warrants were served in the U.S. and by overseas law enforcement partners in connection with this operation. This ongoing investigative effort has thus far uncovered more than $20 million in economic loss and more than one million victim computers.

FBI Director Robert S. Mueller, III said, "Today, botnets are the weapon of choice of cyber criminals. They seek to conceal their criminal activities by using third party computers as vehicles for their crimes. In Bot Roast II, we see the diverse and complex nature of crimes that are being committed through the use of botnets. Despite this enormous challenge, we will continue to be aggressive in finding those responsible for attempting to exploit unknowing Internet users."

The press release also has detail on the most current arrests:

1. Ryan Brett Goldstein, 21, of Ambler, Pennsylvania, was indicted on 11/01/07 by a federal grand jury in the Eastern District of Pennsylvania for botnet related activity which caused a distributed denial of service (DDoS) attack at a major Philadelphia area university. In the midst of this investigation the FBI was able to neutralize a vast portion of the criminal botnet by disrupting the botnet's ability to communicate with other botnets. In doing so, it reduced the risk for infected computers to facilitate further criminal activity. This investigation continues as more individuals are being sought.

2. Adam Sweaney, 27, of Tacoma, Washington, pled guilty on September 24, 2007 in U.S. District Court, District of Columbia, to a one count felony violation for conspiracy fraud and related activity in connection with computers. He conspired with others to send tens of thousands of email messages during a one-year period. In addition, Sweaney surreptitiously gained control of hundreds of thousands of bot controlled computers. Sweaney would then lease the capabilities of the compromised computers to others who launched spam and DDoS attacks.

3. Robert Matthew Bentley of Panama City, Florida, was indicted on 11/27/07 by a federal grand jury in the Northern District of Florida for his involvement in botnet related activity involving coding and adware schemes. This investigation is being conducted by the U.S. Secret Service.

4. Alexander Dmitriyevich Paskalov, 38, multiple U.S. addresses, was sentenced on 10/12/2007 in U.S. District Court, Northern District of Florida, and received 42 months in prison for his participation in a significant and complex phishing scheme that targeted a major financial institution in the Midwest and resulted in multi-million dollar losses.

5. Azizbek Takhirovich Mamadjanov, 21, residing in Florida, was sentenced in June 2007 in U.S. District Court, Northern District of Florida, to 24 months in prison for his part in the same Midwest bank phishing scheme as Paskalov. Paskalov established a bogus company and then opened accounts in the names of the bogus company. The phishing scheme in which Paskolov and Mamadjanov participated targeted other businesses and electronically transferred substantial sums of money into their bogus business accounts. Immigrations Customs Enforcement, Florida Department of Law Enforcement, and the Panama City Beach Police Department were active partners in this investigation.

6. John Schiefer, 26, of Los Angeles, California, agreed to plead guilty on 11/8/2007 in U.S. District Court in the Central District of California, to a four felony count criminal information. A well-known member of the botnet underground, Schiefer used malicious software to intercept Internet communications, steal usernames and passwords, and defraud legitimate businesses. Schiefer transferred compromised communications and usernames and passwords and also used them to fraudulently purchase goods for himself. This case was the first time in the U.S. that someone has been charged under the federal wiretap statute for conduct related to botnets.

7. Gregory King, 21, of Fairfield, California, was indicted on 9/27/2007 by a federal grand jury in the Central District of California on four counts of transmission of code to cause damage to a protected computer. King allegedly conducted DDoS attacks against various companies including a web based company designed to combat phishing and malware.

8. Jason Michael Downey, 24, of Dry Ridge, Kentucky, was sentenced on 10/23/2007 in U.S. District Court, Eastern District of Michigan, to 12 months in prison followed by probation, restitution, and community service for operating a large botnet that conducted numerous DDoS attacks that resulted in substantial damages. Downey operated Internet Relay Chat (IRC) network Rizon. Downey stated that most of the attacks he committed were on other IRC networks or on the people that operated them. Downey's targets of DDoS often resided on shared servers which contained other customer's data. As a result of DDoS to his target, innocent customers residing on the same physical server also fell victim to his attacks. One victim confirmed financial damages of $19,500 as a result of the DDoS attacks.

Recently, I did a post, Botnet owner faces 60 years in prison and a $1.75 million fine, which is about about John Schiefer (above).

The amount of damage bot herders have caused millions of people on the Internet is astounding. Even when you consider the amount of spam, the average Internet user has to deal with on a daily basis, these current arrests are good news for the Internet community. Spam is the vehicle in which most scams, misleading advertising and counterfeit goods are spread in the electronic world.

The FBI press release mentioned some great resources where the average person can learn how to avoid becoming the victim of a bot herder.

In closing, I would like to pass them on:

One not mentioned that is great (my opinion) is http://www.fakechecks.org/. A lot of the scams involving counterfeit checks start with a spam e-mail AND most spam is spread using botnets.