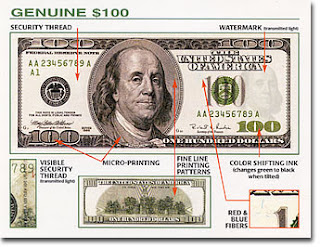 If you are like me, you've already bought too many cookies from the Girl Scouts. Everywhere I go, there is a table selling them and it's hard for me to say no to them.

After all, supporting organizations like the Girl Scouts has long been considered an honorable endeavor.

It's sad to say that at least one scammer has ripped them off with a fake (counterfeit) $100.00 bill in front of a local Walmart in Texas.

The girls were selling cookies in front of the discount store on Wednesday evening when a man said he wanted to buy two boxes. He promptly gave a 100-dollar-bill to the mother of one of the children. After getting his $93 in change, the man left without getting his cookies.


Realizing the man had left his purchase the girls tried to find him, but were unable to. In the meantime, the mother realized the bill was fake but it was too late.


Police say the crook bleached a $5-bill and printed over it to make it look like a $100-bill. Officers say at first glance the bill looks real. "It's the real paper used by the Department of Treasury. Ya know, it has the appearance of a real bill," said Lewisville Police Department Captain Kevin Deaver.

This particular counterfeit $100.00 bill version has been making the rounds for the past few years. Although, it defeats some of the anti-counterfeiting detection devices out there -- largely because the paper is real -- it can be easily caught by the human eye.

These bills are actually $5 bills that have been washed and reproduced as $100 bills. Although at first glance they look and feel legitimate, the way to spot them is by their security features. On the washed (fake) bill the hologram on the right side -- seen by holding the bill up to light -- is Abraham Lincoln. On a real $100 bill, the image is Benjamin Franklin. Additionally, the embedded strips on either side of the bill will say they are $5 bills instead of $100 bills.

Criminals do this by bleaching the bills, then photocopying the $100 bill over it. Unfortunately, portable printing and photocopying technology has made it easy for all sorts of documents to be counterfeited.

For additional ways to determine real money from fake money, the United States Secret Service has an excellent page about it, here.

Another good resource is:

Both of these sites offer training materials for businesses. Using them might be a good option for charitable organizations, also.

Although, no date is set yet, the government plans to issue redesigned $100 bill sometime in the near future. News reports indicate the reason for the redesign is directly related to how many of these washed bills have been seen in recent years.
Posted by Ed Dickson at 6:14 AM

This wouldent happen if they just use paypal.

Paypal? Are you serious?

the logical way to do it would be to examine every bill they get. one of those ultraviolet lights won't do any good - as it is genuine paper, but it may be a positive learning experience for the girl scouts, to become better citizens to be aware of fake bills.

and also - whoever made that bill is a fool. wouldn't it be logical to use the smallest bill ($1) as opposed to something 5x the value?