Crimeware salesmen, like most e-commerce types, take a dim view when their creations are knocked-off (pirated). To protect themselves, they warn their customers (Internet criminal types) that if their products are counterfeited, they can and will be reported to the anti-virus companies.

Specifically, the verbiage used as reported on the Symantec blog is, "the binary code of your bot will be immediately sent to antivirus companies."

The reason reporting reporting the binary code of a bot defeats the crimeware kit in question (Zeus) was mentioned in a previous post on this blog:

Here are the details, as reported on the Symantec blog by Liam OMurchu: 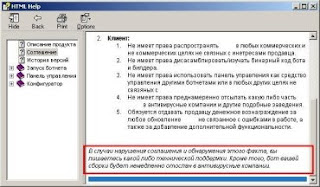 2. The Client:
1. Does not have the right to distribute the product in any business or commercial purposes not connected with this sale.
2. May not disassemble / study the binary code of the bot builder.
3. Has no right to use the control panel as a means to control other bot nets or use it for any other purpose.
4. Does not have the right to deliberately send any portion of the product to anti-virus companies and other such institutions.
5. Commits to give the seller a fee for any update to the product that is not connected with errors in the work, as well as for adding additional functionality.

In cases of violations of the agreement and being detected, the client loses any technical support. Moreover, the binary code of your bot will be immediately sent to antivirus companies.

It should be noted that these crimeware kits, as I've written frequently, make it fairly easy for not very technical criminals to commit technical crimes. As noted in their licensing agreement, the criminals selling these kits in underground forums even provide technical support.

Despite the clear licensing agreement and the associated warnings, this package still ended up being traded freely in underground forums shortly after it was released. It just goes to show you just can’t trust anyone in the underground these days.

Of course, in most instances, there is no honor among thieves.

Liam notes that this licensing agreement is for much talked about Zeus kit, which has "drive-by" capabilities. If you are unfamiliar with what "drive by" means on the Internet, it means that your computer only needs to visit a site to become infected.

Here is a previous post, I recently did about the "drive by" problem, which is making the Internet a more dangerous place all the time:

Nowadays, all you need to do is visit the wrong site to have your personal information stolen!

Liam's post on the Symantec blog, here.
Posted by Ed Dickson at 6:14 AM

I'm not sure what to make of this - the more I think about it, the less sense it makes from a business standpoint (even though the business is not legal, it's still a business, and a business is trying to stay in business and make money, right?) - turning your customers over to the authorities, unless you OWN the authorities, is kind of self-defeating, isn't it?