Inauguration Security Sets a Record by Itself!

The inauguration of the forty-fourth president, Barack Obama, will have a security force larger than what is currently deployed in Afghanistan to ensure it is a safe and sane event. The human resources securing the event will include Secret Service personnel, almost 30,000 National Guard troops, close to 1,000 FBI personnel, 8,000 police officers, TSA screeners and other more obscure assets.

The security assets deployed for this event are so numerous, I had to read several mainstream news articles and press releases just to try to determine how many agencies were involved. Even after doing this, I would guess there are some that are not being publicly disclosed for good reasons.

Michael Chertoff, Homeland Security Secretary, will be on-hand himself and operating from a multi-agency command center. The command center will have representatives from 58 federal and local agencies. These representatives, who will all be in the same room, will give those involved in the event the ability to instantly communicate with each other.

Chertoff believes this will be the most complex security event ever mounted, but also mentioned to CNN that he is worried about the cold weather and the impact it might have on unprepared visitors. We need to remember that a lot of unfortunate things can occur when a mass of human beings gather. Unlike most of Bush's administration, Chertoff will remain on duty until after the inauguration is over.

I found more information about inauguration security on the Secret Service site, which states that the FAA (Federal Aviation Administration) will be stepping up security on the air corridors around DC and the Coast Guard will patrol on the Potomac. It also mentions that the police involved will be from the Washington Metropolitan, Park and Capitol departments. If you are attending the event, or live in the area, it has a list of road closures that will be in effect during the inauguration. 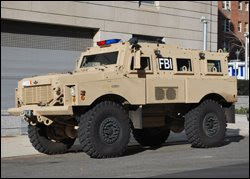 In addition to the high-tech specialty equipment being deployed by the FBI — they will have a SWAT Team, Hazardous Materials Response Team, Bomb Technicians, an Underwater Search and Response Team and Crisis Negotiators — at the ready to handle a crisis scenario. 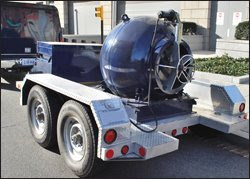 The military personnel — who will be mostly National Guard troops because of a law that prohibits active duty personnel from engaging in domestic law enforcement duties — will have assignments in the events, also. These include providing bomb sniffing dogs, NBC (Nuclear, Biological and Chemical) teams, transportation and communications units.

According to all of the officials involved, there is no specific threat they are worried about. Although some of the pundits are complaining that the security for this event is too intense, the proof in the pudding will be allowing them to claim they were right after it is all over. If that is the case, nothing will have happened and these measures will have accomplished their goal!