Auction Fraud and the Romanian Connection 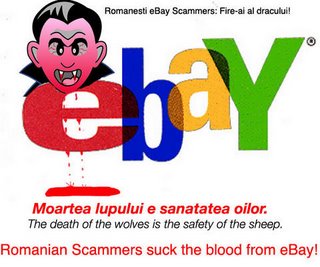 (Interesting picture courtesy of Yahoo Group, eBay_scamkillers)
A lot of Internet crime seems to either come from Romania, or is tied into nationals from that country. Yesterday, I was reading about an arrest in the Los Angeles area, where two Romanians were indicted for auction fraud involving wire transfers and identity theft.

The indictment alleges that Manolache, Salageanu and others were involved in an Internet scam that defrauded victims across the United States by holding bogus auctions on eBay, Yahoo! Auctions and Autotrader.com. The conspirators posted items for sale that were never intended to be sold, then collected money from the "successful" bidders. The victims were instructed by the online sellers to send their payment by Western Union to circumvent online payment systems. Manolache and Salageanu then went to Western Union locations in the Los Angeles area and, using false identification, collected the victims' money. None of the victims received the items they had purchased.

As part of the scheme, the online sellers often masqueraded as Hurricane Katrina relief organizations.

It seems that a lot of the intelligence used to go after Manolache and Salageanu was compiled by the Internet Crime Complaint Center (IC3). They have a page dedicated to this (Romanian) activity, which says:

Auction fraud is the most prevalent of Internet crimes associated with Romania. The subjects have saturated the Internet auctions and offer almost every in-demand product. The subjects have also become more flexible, allowing victims to send half the funds now, and the other half when the item arrives.

And there are private individuals, who are fed up with auction fraud originating from Romania. Yahoo group, eBay_scamkillers is one such group comprised of volunteers that actively fight the Romanian scammers.

Here is what they say about their group:

Too many people are being rejected because they fail to properly identify themselves. If we even THINK you are a Romanian, you will be rejected. Take a moment to send a note to the group owner.

We share resources, baiting techniques and, of course... war stories! It's OK to lurk here, but why not join and help us SCAM THE SCAMMERS?

If you are a whiner, please do not join this group. There are plenty of eBay anti-scam forums where people can go to cry on each others' shoulders about their misfortunes.

WE ARE PRO-ACTIVE and WE ATTACK THE SCAMMERS ON MANY FRONTS. We use every available resource to fight back and we are VERY successful.

At first look, the site appears to be fairly inactive, but if you are accepted (after their screening process), they contact you.

Auction fraud is one of the biggest issues in the world of Internet crime. On an interesting side note, this recent indictment also highlights that not all auction fraud occurs on eBay. A lot of the complaints on these two Romanian nationals were from Autotrader.com and Yahoo! Auctions.

There has been a lot in the news lately about flocks of eBay users seeking "greener pastures." It will be interesting to see if "auction fraud" follows them.
Posted by Ed Dickson at 7:50 AM

eBay Scam Killers has a few hundred members at our YahooGroups address, but we are also in a secured area at www.thescambaiter.com forums. The great admins at The Scambaiter saw our need for a "wall" against the Romanian scammers and gave us a private forum. The Yahoo site is merely a screening area to keep them out. The Scambaiter has endured several nasty DOS attacks from Romania, yet they have never complained.

We have also done some "inside work" for our friends at perverted-justice.com, who many have seen on Dateline NBC's "To Catch a Predator" as they bust child molesters.

eBay Scam Killers cancelled over 25,000 scam auctions in 2005 and, combined with our Nigerian scam-fighting brothers at TheScambaiter, we provided law enforcement with over 2,000 pages of stolen identities - mostly phished credit cards. We continue this work today. Using common Romanian language catch-phrases to bust open large email accounts with hundreds of potential victims on the hook, we tallied several hundred thousand saved US dollars which would have ended-up in Bucharest or Rm Valcea - the scam capital of the world.

We are proud to have established contacts with the US Secret Service, New Scotland Yard, the Royal Canadian Mounties and Australian authorities.

We have chased the Romanians from eBay Motors (classic car scams) over to home electronics and bikes.... then horse trailers (odd).
They are now active in vintage musical instruments and bulk microphone sales. (Any bulk order of Shure microphones on eBay is a scam if the shipper is "EMS Shipping.")

Thanks for spreading the word about eBSK. The only true way to defeat the Romanian scammers is through public awareness.