A look into labor abuses in the aftermath of Hurricane Katrina 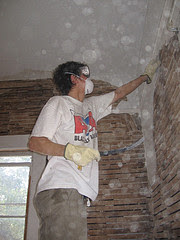 It never ceases to amaze me that we keep seeing additional allegations of abuse, fraud and waste come to light as a result of the Katrina hurricane, and it's aftermath.

Brian Beutler of the Media Consortium (courtesy of AlterNet) wrote a pretty telling article of the abuses dealt to laborers, who went to New Orleans to assist in the reconstruction/clean-up effort.

In the two years since the disaster, there have been thousands of testimonials -- issued to both government officials and private advocates -- about a wide taxonomy of abuses.The most frequent complaint workers cite is withheld wages, but almost as numerous are accusations of employee intimidation, toxic and hazardous working conditions, immigrant abuse, trafficking, exploitation and monetary extortion.

Many workers, who went to New Orleans were paid a small percentage of what they were promised:

According to the article, the Bush Administration suspended affirmative action and documentation requirements for immigrant workers. They also removed the requirement to pay "prevailing wages."

The end result of this was that visiting American citizens and local residents were underbid by foreign workers, who probably weren't legal. Of course, no one can say this for sure because it wasn't checked out (very well) at the time. However if this wasn't the case why did Senator Mary Landrieu (Democrat LA)request that ICE agents be dispatched to look into the problem?

This resulted in even more people doing a dirty job not getting paid:

The result was astounding. On payday, subcontractors, faced with undocumented workers seeking cash, often called ICE to report their own operations, causing frightened workers to either scatter or face deportation to their home countries without pay.

Likewise, employee recruiters, dispatched by subcontractors to foreign countries, would offer often-destitute men and women the promise of good work and fair wages at any number of reconstruction jobs in New Orleans.

Congressman Dennis Kucinich held hearings into this to determine, whether or not the Department of Labor (DOL), did their job in controlling some of this abuse.

Many believe, they did not.

For those, who like me continue to be fascinated by the social issues in the Katrina disaster, Brian's full article can be read, here.

My personal opinion is that they need to be studied, carefully. A lot of citizens (and apparently non citizens) suffered, not because of a lack of resources, but because of what appears to be a "few greedy people."

I've written quite a bit about Katrina (in my own personal study of what went wrong). My previous posts can be read, here.

Another great place to learn more about the social issues surrounding Katrina is Margaret Saizan's Beyond Katrina.
Posted by Ed Dickson at 6:14 AM