When sweepstakes scammers target the elderly should it be considered elder abuse? 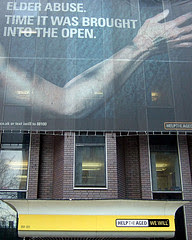 Lottery and sweepstakes scams are on the rise and there seems to be little help for the victims, who fall for them. There also seems to be not very many consequences for the criminals, who are stealing people blind.

From the Star article:

The scammers initially told the 78-year-old former aircraft worker he’d won $2.2 million in a lottery. He just needed to wire cash to cover the taxes and other fees on his windfall.

The article also states that no one seems to be able to help these people once they've sent the money, but these crimes are now being classified as "cross border fraud."

The Missouri AG has tried to step in, but is limited in his jurisdictional powers to sending cease and desist letters to the scammers up North:

Seniors who make the mistake of responding to one mailing or phone call often end up on lists that are sold and resold, resulting in a flood of junk mail.

Late last year, Missouri Attorney General Jay Nixon launched “Senior Sting,” an ongoing operation in which 300 seniors were asked to save such solicitations. They collected 8,000 pieces of mail in the first month.

Don Burnett, of Louisiana, Mo., said at one time he was receiving eight mailings a day from foreign lotteries, sweepstakes and check schemes.

Interestingly enough, a lot of these solicitations are coming in junk mail and telemarketing calls and not from spam e-mails.

The article speculates that the fraudsters doing this are compiling telemarketing lists. While this is probably true, an information broker (InfoUSA) was recently accused of selling market segment targeted lists to some of these scammers.

Given the fact, most of these enterprises pose as legitimate businesses, I wonder how hard it is for them to simply purchase these lists?

The NCL site has an entire section on Elder Fraud, which can be reached by clicking, here.

Not to be outdone, the FTC also covers this subject in great detail on their site, here.

What's interesting to me is that I see elder abuse becoming a hot issue. The National Center for Elder Abuse is an organization that lobbies for stricter laws when senior citizens are abused.

While most of these telemarketing scams are considered fraud -- which many think of as a low priority crime, perhaps if when it involves senior citizens, we think of it as elder abuse -- the authorities on both sides of the border might begin to get more aggressive in prosecuting the criminals behind these schemes.

In my opinion -- stealing a senior citizen's entire life savings is nothing less and the criminals doing this deserve to be considered as what they truly are -- one of the lowest forms of life on the Planet!

I can speak with some experience here. I was a volunteer victim advocate for the Santa Barbara DA's office. The volume of elder abuse is enormous. California has separate laws for elder and dependent adult abuse, including financial crimes (which I focused on). Every state should, IMO, have additional more severe penalties for senior and dep adult abuse, and DA task forces assigned to these sectors. The cases that I saw were sickening. Santa Barbara county even has a special task force (Called FAST team) made up of several organizations including the DA, police, adult protective services, etc that meet regularly and try to get the word out to people to prevent and stop scams. Bank tellers and employees should and can be trained to stop obvious abuse, and this applies to CPA's, financial advisors, etc.