Gouging at the Pump 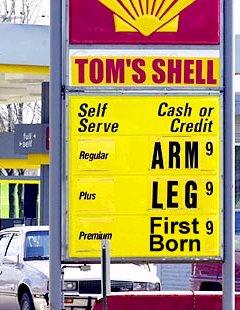 For quite some time, gas prices have gotten higher for the consumer. Within the same time frame, oil companies have been making record profits. In the wake of Katrina, fuel prices rose before any new (more expensive) shipments arrived. This lead to speculation that some were taking advantage of the situation (gouging).

I read an interesting article from Karen Pierog of Reuters that some of our elected representatives are taking action.

Here are a list of recent actions in some states cited by the article:

Hawaii on Thursday became the first state to impose limits on gas prices since the energy crisis of the 1970s. The state will set weekly caps on wholesale gasoline prices for different regions of the islands.

Georgia Gov. Sonny Perdue on Friday signed an executive order suspending the state's 7.5 cent-per-gallon motor fuel tax through the end of September. The move must be ratified by the legislature.

New York City, City Council Speaker Gifford Miller and others asked Friday for state authority to set a flat, per gallon tax rate to ease gas prices that have jumped over $3.50 per gallon.

Democrats in the Oklahoma legislature proposed suspending the state's gas tax for the rest of the year, saving drivers 17 cents per gallon, or $1 million a day.

Connecticut Gov. M. Jodi Rell has raised the possibility of a temporary suspension of the gross receipts tax on gasoline.

In Ohio, House Speaker Jon Husted said he will push legislation for more widespread use of alternative fuels such as biodiesel and ethanol.

Wisconsin Gov. Jim Doyle called on the legislature to pass a bill ensuring gas sold in his state will contain 10 percent ethanol."

We've known since the 70s that it might be a good idea to develop alternative energy sources. The time to do so is now and stop allowing our destiny to be controlled by foreign entities and large corporations that seem to be making more money than ever.

As concerned citizens, we can also reduce our personal consumption of oil products. There are many ways to do this. Here is a link to an article on ways to reduce your consumption of gas:

So far as the gougers, I recommend contacting your attorney general with any business you suspect of gouging. Now might be a opportune time to send a message to those who decide to take advantage of other's misfortunes.

Good post Ted - Very informative but I notice my state California did not mention the taxes being dropped even temporarily. That is a good thing by our elected officials standards. They could not do without for even a month.

If price manipulation is going on dropping taxes really is going to benfit the conpanies and groups that are price gouging.

If business can funtion with out ripping people off it needs more regulation.