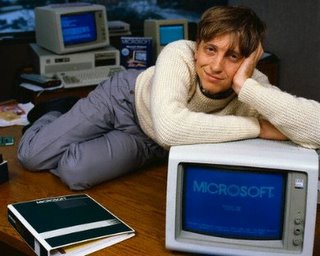 (Bill in 1983)
There are many out there, who like to bash Microsoft relevant to security. While no one is perfect, Bill and company are actually doing quite a bit to apprehend those who would commit fraud, phishing and financial misdeeds.

Perhaps some of their peers should take notice and join in.

Bill and his better half are also doing a lot of activities designed to make the world a better place. Time recognized this by naming him and Melinda as "persons" of the year.

"To date Microsoft has supported more than 325 phishing and spam enforcement actions worldwide, including civil lawsuits by the company as well as actions taken by law enforcement or government agencies for which Microsoft provided substantial support or referrals. The company also has released a new Microsoft Phishing Filter Add-in for MSN Search Toolbar and the upcoming Windows Vista and Internet Explorer 7 to help protect customers from dangerous Web sites. In addition, the company blocks more than 3.4 billion spam messages per day from reaching the inboxes of MSN Hotmail customers."

To me, that's an example of taking some pretty direct action in the war against cyber fraudsters. Let's face it, apprehending and holding people accountable is the most effective deterrent against this activity.

In fact, Bill and company (in my opinion) and attacking the root of the problem, which is that crime on the internet is borderless. Politics, jurisdictions and the egos that go along with it hinder the efforts against the cyber-criminals. In fact, in their highly organized hierarchies, they use this (social reality) to defeat efforts to stop and prosecute their activities.

Microsoft is taking the efforts to apprehend and prosecute across borders.

Most recently (in the news), they helped the authorities in Bulgaria squash a phishing gang that I'm certain wasn't targeting Bulgarians.

Here is the press release from Microsoft:

Microsoft Praises Bulgarian Authorities on Investigation and Arrest of ...
Posted by Ed Dickson at 10:23 PM

Guess I should have read this before I commented on the Wells Fargo post...

this is a joke right? microsofts msn chatline is full of pornspammers and scammers and they cannot or will not clean that up. we have very little faith in anything microsoft does. this "press" they received is just window dressing to try and show the public that they are busy doing something.