Does Fraud Impact the Economy 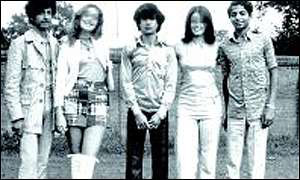 (Osama at Oxford circa 1971, far left)
Militant attacks on oil facilities in Nigeria and a message from Osama Bin Laden caused oil prices to go up. As a result, the stock market is going down. Here is a story from the LA Times:
Stocks Dive on Fears of a Faltering Economy

Of course, disappointing earnings also contributed, but what I thought was interesting was a report that the Japanese Stock Market is hurting because of alleged fraud at a popular internet company.

In a story from MediaCorp:

"Japanese prosecutors will question the whiz-kid founder of major Internet firm Livedoor in the coming week in connection with a fraud scandal that has sparked market chaos, a news report said.

The reported decision came after investigators questioned chief associates of Livedoor president Takafumi Horie, 33, over alleged violations of securities laws. "Horie is suspected of having been involved in the alleged disclosure of false information regarding corporate acquisitions, as well as falsification of financial statements," the Nihon Keizai Shimbun said."

Apparently, this revelation caused the Tokyo Stock Exchange to close early as the was a massive rush to sell, which threatened to shut down it's computer systems.

Here is the full story from MediaCorp:

Recently, when we get bad economic news there seems to be two consistent reasons, dishonest corporate activity and oil prices going up.

Remember the recent reports of gas gouging in the wake of Katrina and a call for investigations? Prices shot up before the hurricane even hit land. Here is a story from the AP on that issue:

Not that I'm an expert, but it seems that energy costs skyrocket with any excuse, whether there is any actual damage, or not. It also seems that there are a lot of companies out there with less than honest intentions being caught.

The oil companies and their OPEC partners seem to be raking in the dough. No one has attacked anyone and before this Osama hadn't spoken since the U.S. election. So far as Nigeria, there have been problems there for a long time and the oil companies doing business there invest heavily in security.

In other words, the risk and activity over there is nothing new.

My personal opinion is that we should have been working harder on alternative energy sources since the 70's and OPEC drove up prices the first time.

In fact, what is sad is that Osama is from one of the OPEC countries and the Bin Laden fortune (although it came from construction) was financed by oil. In actuality, his recent tape probably will bolster the economy of his homeland, Saudi Arabia and those fortunate enough to have their money invested in the oil industry.

Bin Laden needs to be caught, brought to justice AND maybe someone should take a strong look at where he got and probably continues to get his financing.

A prudent man once said, if you want to discover the truth follow the money.

Until then, I guess the rest of us will just have to keep tightening our belts.
Posted by Ed Dickson at 4:34 PM