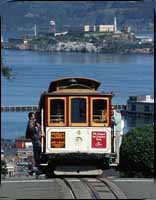 San Francisco's famous cable cars seem to be having some issues from within. Here is a story I read in the San Francisco Chronicle:

"San Francisco Mayor Gavin Newsom said Wednesday he is convinced some cable car conductors are stealing fare money -- and that the Municipal Railway needs to change the way it collects cash to stop the thefts.

Newsom said he believes conductors are skimming fares from cash-paying riders because on three occasions he rode the cable cars and handed over his $5 cash fare but never received the required receipt."

For the full story from the Chronicle:

If the activity is so blatant that Mayor Newsom is seeing it, why is there no effort to conduct an investigation and apprehend those responsible for doing it? How much payroll does Muni spend protecting their assets and where are those resources when he needs them?

According to Irwin Lum, who is the president of the union representing the workers, "failure to provide a receipt isn't proof of theft and that the problem of stealing is, at most, sporadic."

Everyone blames the potential on an antiquated fare system, where their cash flow can't be tracked. Last year, Muni had to cut service and raise fares and they still are facing a $4.1 million dollar deficit.

If these guys were in the private sector and ran their business this way, they would go bankrupt. Additionally, if people are stealing why does there appear to be no effort other than the Mayor's observations and statements to stop it?

After all (even with their antiquated system) it would be rather easy (with the technology available today) to install hidden cameras and catch the dishonest red handed. Even without technology, I would imagine money could be marked and tracked through their accounting system to establish theft.

Trust me, people are caught this way stealing money all the time.

Let me see, they're losing money, people might be stealing, we have a lot of excuses about antiquated accounting systems and even when two people are caught nothing comes of it.

If I were Mayor Newsom, who was elected to represent the people that are ultimately paying for all this incompetence, I would be looking at holding some senior people and the people charged with protecting their assets accountable.

Even sadder is Muni's statement that if they actually do catch someone, the only consequence is that they will be fired. They deserve to go to jail!

Perhaps that would be a much more effective deterrent.

I admire the Mayor's courage in taking this obvious issue on.
Posted by Ed Dickson at 6:34 AM

First, let me say the Mayor is not alone. It happed to me a few years ago as well. I gave the conductor a $5.00 bill and never got change. I went up to him, asked for my change and a receipt. He told me the fare was $5.00 to which I replied "Listen I'm not a tourist and I know what the fare is now give me my chage". He did so reluctantly though without a receipt. I think the only way to prevent this is to issue tickets or passes for the cable cars. If you want to ride a cable car you would have to purchase a pass at the turnstyle. I don't see any other way of preventing this sort of behavior.

How many fingers are in the pie.


This tells me that the employees are willing to back up thieves because they are protecting their own ability to get caught and retire with full benefits.