Has the European Union become the primary point of origin for spam and scams?

Today, Kelley Conley (manager, Symantec Security Response) announced on their blog that the February State of Spam Report had been posted.

An interesting trend showing that the European Union was now the number one origin point for spam was noted:

The February State of Spam Report highlights an interesting trend in the shift of spam moving from North America to EMEA. The percentage of spam originating from EMEA has surpassed that of North America, which represents a significant shift in where the bulk of the world’s spam is “supposedly” sent from.

Well "supposedly," most of the spam is coming from the European Union. Here is the reason why:

Although it appears that way the very nature of spam distribution makes it difficult to accurately pinpoint the true geographic origin the sender. Spammers often take advantage of tricks that allow them to mask their real location and bypass DNS block lists.

Spam doesn't seem to be decreasing, either. January analysis by Symantec revealed that 78.5 percent of all e-mail sent is spam.

Other notable results from the report are that spammers a.k.a. scammers are busy taking advantage of a rumored tax rebate to steal people's identities and using Valentine's day deals to lure men to a dating site.

My guess is that we will see Valentine's day e-cards bearing malicious software pop up in the near future, also. Clicking on one of these normally turns your system into what I refer as a "spam spewing zombie." It's also a good way to have a keylogger implanted (dropped) on your system, which is capable of stealing all your personal and financial information.

Another persistent trend is spam offering too good to be true job offers, which entail tricking someone into laundering the proceeds of Internet crime. If anyone is considering getting involved in this activity, please be aware that I hear people are getting arrested after getting involved in one of these schemes.

Even when people don't get arrested, they end up being responsible for a LOT of money. Their identities are often used to commit more crimes without their permission, or immediate knowledge, also.

In case anyone wants more information on this, I've written a few "tidbits" about this type of scam (spam), which can linked to, here.

Spammers are also exploiting the global immigration issue by offering "too good to be true" offers of visa help in Europe. So far the targets are Russians and Ukrainians, but if this spam (scam) proves profitable, I'm sure it will be marketed (spammed), elsewhere.

I found this especially ironic since it describes a great way to describe most spam, "manure." And if 78.5 percent of all e-mail being generated is spam, we are facing tons of "manure" on the Internet on a daily basis!

I guess that means that most spammers are full of "manure."

The full report, which I highly recommend reading can be seen, here. 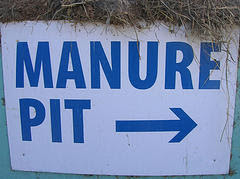 (Picture courtesy of Josh Bancroft at Flickr)
Posted by Ed Dickson at 5:05 AM

How does anyone really figure out the origin of spam, given that most of it is coming from zombie pcs?