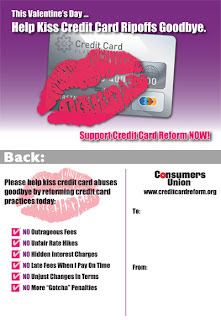 Consumers Union is launching a campaign for Valentine's Day to let Congress know that despite overwhelming evidence that credit card companies seem to be gouging a lot of people, very little has been done to correct the problem.

Just before the start of this holiday season, the GAO released a scathing assessment of the credit card marketplace and its regulation. Click here for the report itself. See Consumers Union's response to the report and to the problems faced by Consumers. With a national spotlight on an out-of-control industry, its time now to push this to the top of the agenda as a new Congress reconsiders its priorities for Americans.

Many more examples of a LOT of evidence that consumers are due some relief, here.

In their own words, here is a description of the campaign:

Kiss them goodbye--send the Valentine's Day card at right to each of your lawmakers, asking them to pass real reforms for you. As the economy tightens, you need fair credit, not "gotchas." Our goal: 100,000 cards ready for delivery by February 14th.

I'll provide a link to the campaign (in case anyone is interested in an easy platform to voice their opinion), here.

There is no doubt that we are facing an impending crisis with bad debt. Please note that this doesn't only apply to credit card debt. In case you haven't noticed, a lot of people are facing the loss of their homes because of what many consider irresponsible lending practices.

Part of this is caused by fraud, which is what I normally write about. Fraud has been enabled by extremely loose marketing procedures designed to drive selling credit cards, as well as, other financial products.

Whenever a company has losses they have to pass it on in their cost of goods to the people buying their product.

I've often suspected that there is a direct correlation between all the bad debt caused by not very responsible lending practices and some of these hidden fees that keep getting charged to people, who are trying to be responsible and pay their bills.

Is it fair for the people trying to pay their bills to subsidize a lot of bad debt caused in part by irresponsible marketing practices?

Here is one of my favorite posts, which shows how bad debt is enabled by a rush to market a credit card in a not very responsible manner (my humble opinion):

Ever wonder how well you are protected from credit card fraud?

Previous posts, I've written about Consumers Union and their efforts to bring a little sanity to this problem, here.

If you take time to look at these previous posts you will notice that effective action keeps getting blocked before anything is done about this problem. This is probably the best reason (I can think of) to let politicians know that this is an important issue to the people, who will be deciding whether they should remain employed in their current positions.

My guess is that these fees can pay for a lot of special interests to block any meaningful legislation from being passed.

USA Today did an interesting editorial about how much money (an estimated $74 million in the past two decades) has been donated by the card issuers to political campaigns, which might point to the reason why legislation keeps getting blocked.