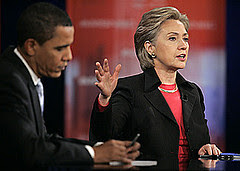 I try to stay on the subject of Fraud, Phishing and Financial Misdeeds, but every once in awhile I stray a little off subject.

Although, technically push polling is slightly off subject for this blog, it is similar to what I normally write about. "In the broadest sense, a fraud is a deception made for personal gain," according to Wikipedia.

Substitute personal for political in the Wikipedia definition and some might consider push polling a form of fraud.

In case you are unfamiliar with the term, "push polling," here is Wikipedia's definition:

A push poll is a political campaign technique in which an individual or organization attempts to influence or alter the view of respondents under the guise of conducting a poll. In a push poll, large numbers of respondents are contacted and little or no effort is made to collect and analyze response data. Instead, the push poll is a form of telemarketing-based propaganda and rumor mongering, masquerading as a poll. Push polls are generally viewed as a form of negative campaigning.

With Super Tuesday coming up tomorrow -- and the fact that the great State of California has a lot of delegates at stake -- I wanted to help bring attention to some push polling tactics that are surfacing.

Andrew Malcolm reported on the LA Times blog that a push poll is being conducted in California that appears to favor Hillary Clinton. A former news producer, Ed Coghlan, "played" along on an unsolicited call he received, which supports this contention.

Ed, who's a former news director for a local TV station, was curious. He said, "Sure, go ahead."

But a few minutes into the conversation Ed says he noticed a strange pattern developing to the questions. First of all, the "pollster" was only asking about four candidates, three Democrats -- Hillary Clinton, Barack Obama and John Edwards, who was still in the race at the time -- and one Republican -- John McCain.

Going a little further into Coghan's deduction that he was being push polled:

Also, every question about Clinton was curiously positive, Coghlan recalls. The caller said things like, if you knew that Sen. Clinton believed the country had a serious home mortgage problem and had made proposals to....freeze mortgage rates and save families from foreclosure, would you be more likely or less likely to vote for her?

Every question about the other candidates was negative. If Ed knew, for instance, that as a state senator Obama had voted "present" 43 times instead of taking a yes or no stand "for what he believed," would Ed be more or less likely to vote for him?

The LA Times did try to nail down the Clinton campaign as to who was behind this poll and here is what happened:

Phil Singer, the spokesman for the Clinton campaign. was contacted by e-mail last night. He answered that he was there. He was asked if the Clinton campaign was behind the push-poll knew who was behind it or had any other information on it. That was at 5:27 p.m. Pacific Time Saturday. As of this item's posting time, exactly eight hours later, no reply had been received.

So far as me personally, if I get a pesky (what I consider) telemarketing call from a candidate, I plan to just say "no" and hang up.

Wouldn't it be nice if someone got a do not call list going for political interests that use tactics that are just as seedy (my opinion) as the most deceptive telemarketing tactics the list was designed to protect us from?

Full post about this matter from the Los Angeles Times, here.
Posted by Ed Dickson at 4:19 AM