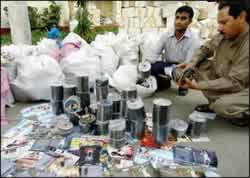 Counterfeit goods are a worldwide problem. With the global economy, the companies being counterfeited are spending a lot of money to try to stop the problem. But have they been successful?

The Daily Times of Pakistan is reporting:

A long campaign to remove pirated goods from shop fronts in Asia is finally having an impact but the crackdown has also changed the nature of the problem and new outlets are flourishing. The results of police raids, a slate of new laws and increased prosecutions can be seen across the region on the back streets of Beijing, Hong Kong, Taipei, Singapore and to a lesser extent Phnom Penh and Hanoi.

To counter the authorities, black market buccaneers are shifting their goods from roadside stalls and shopping malls to the Internet. Su's team now also conducts daily patrols of Internet sites. His point was echoed by industry observers in Mumbai and Seoul, where much like Bangkok and Jakarta, it's business as usual with counterfeit products brazenly on display in the tourist precincts.

In other words, the people behind counterfeiting are very adept at mutating their method of operation and carrying on.

Of course, we in the West can blame Asia and the third world for this activity, but if weren't for people in the West buying these goods, I doubt it would have grown into an international (worldwide) problem.

AND the companies being counterfeited probably have something to worry about. With the popularity of Internet auctions, the business of counterfeiting goods is likely to grow. Internet auctions are big business and sites, such as eBay refuse to accept blame for the actions of their members. The sale of counterfeit goods is rampant on these sites and Tiffanys and Microsoft are spending a lot of money bringing legal action to try to curb it.

Some of these companies might be contributing to the problem in another way. After all, do you think all the $100.00 tennis shoes we buy are made in North America, or Europe? Not very likely in the global economy. In the quest for cheap labor, long regarded as one of the major expenses of doing business, many of our goods are produced in the same countries that produce the counterfeits. The end result is counterfeits of about the same quality as the item being counterfeited.

I doubt there will be any significant impact on this problem until all parties involved clean up their acts. We can blame and prosecute counterfeiters in far-away lands, but as long as there is a demand and a ready means to distribute these goods, the problem isn't going away.

I recently read a book by Tim Phillips, "Knockoff," which is best analysis of the situation I've seen.

If you are interested, I would highly recommend reading it. 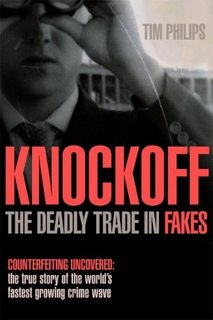